It is a change but not a change for SELLinALL. SELLinALL changed its Headquarter's premises to a new.

" Successful entrepreneurs judge correctly the need for change then do something about it".  -  James Edward Smith. 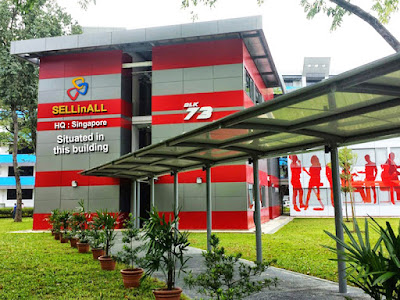 SELLinALL changed its Head quarter's premises to a spacious place at Blk.73, Ayer Rajah Crescent, One North District, Singapore,  It is a change for the good. But SELLinALL never changed (compromised) its quality service to its clients and its rugged software which works in all the modern bits and bytes gadgets like tabs, personal computers, lap tops, smart phones etc.,

In the year 2014 five young techies with a decade of experience in the e-commerce field, met in the suburbs of Singapore and brainstormed to develop a
software for the online sellers. Their aim was to fulfil all the drawbacks and problems faced by the online sellers while uploading their products data in the e-market places. The result is their brain child - SELLinALL.

In May 2015 SELLinALL participated in the qualifier for the Echolan 27 East Asia Conference and has been placed as the top three startups of Singapore and won the award.

Subsequently in the Echolan Asia Summit 2015, SELLinALL has been placed in the top ten out of 100 startup contestants from 14 countries.  In 2016 February, SELLinALL has participated in Bridge Fest 2016, Tokyo, Japan and their high voltage pitching has been well appreciated by the participants.

By the month of April 2016, SELLinALL opened its first overseas office in India, at Chennai's IT corridor, Rajiv Gandhi Salai.

Dear Online Sellers!! SELLinALL provides the following features which will definitely boost your sales in the e-commerce places like Amazon, Ebay, Lazada group, Etsy, Snapdeal, flipkart, jabong,  magento, face book etc.  Not only this, your valuable time shall be saved and you can use the saved quality time to improve your sale.